Instagram Hashtags in the Comments vs in the Caption

Instagram hashtags are one of the most important things you can use to help your social media posts get seen, but it is important that you use them correctly.

The big question on this topic is this: What is the outcome if you use the first comment hashtag cloud strategy vs. leaving your tag clouds in the caption?

We found a GREAT study done by Social Insider and decided to break down some of the information for you in an easily digestible post.

This is a bit longer than the posts that I usually write, but I think it’s a really interesting topic – and wanted to share it with you.

This is one of the most burning questions—and there is a lot of data in this study to shed some light on the topic. The important thing to think about is whether your focus is impressions or reach since they are two different metrics.

“Reach tells you how many unique users are served your content every day vs. impressions which is the number of times your content, whether a post or a story, was shown to users.” Sprout Social

Here is a breakdown of the data for reach: 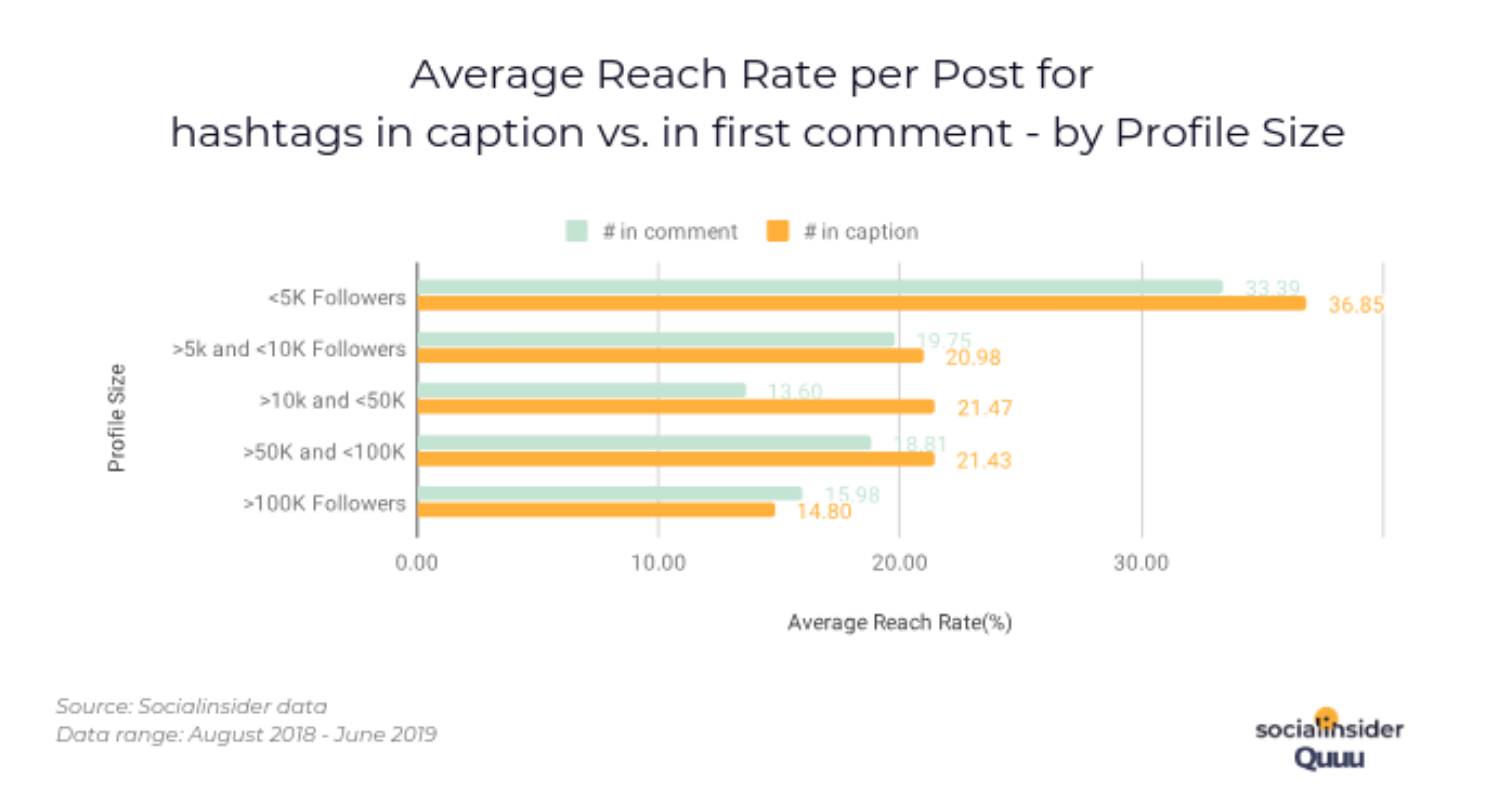 Here is a breakdown of the data for impressions: 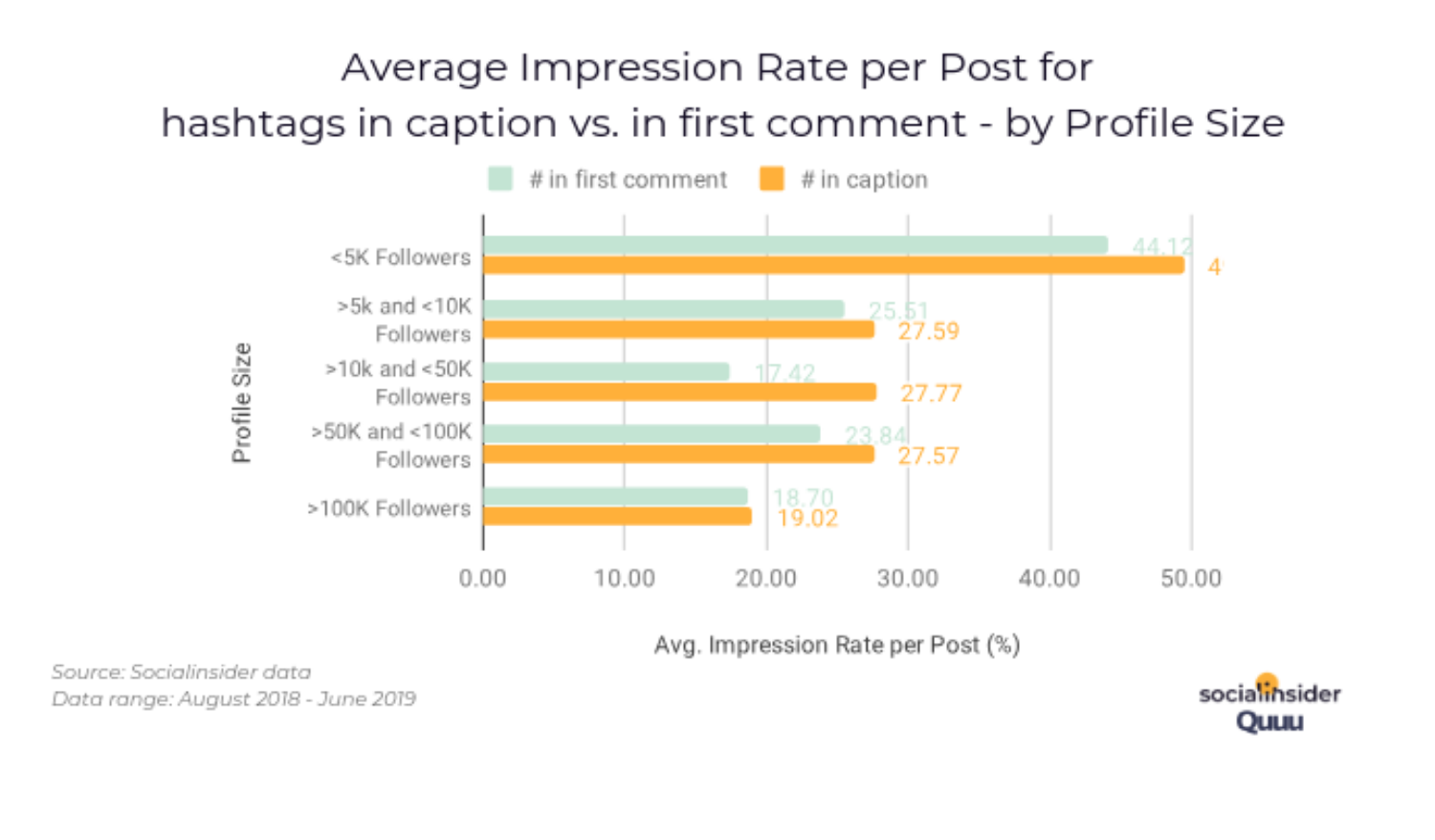 “Looking at the best average reach rates, there is a clear division between accounts with under 100k and over 100k followers. This means that the big players need to adjust their post strategies accordingly. However, using hashtags in the caption brings the most impressions, regardless of the size of the Instagram account” – Social Insider

However, there is another element that you need to consider in order to ensure you are getting the most out of your hashtags—the total number of hashtags being used.

We bet you’ve noticed two very drastic strategies. Most profiles use minimal hashtags (7 or fewer), while others are maxing out between 27-30 per post. So, what does the data say about the number of hashtags + performance when placing them in the caption or in the first comment.

Distribution of posts with Instagram hashtags in the caption: 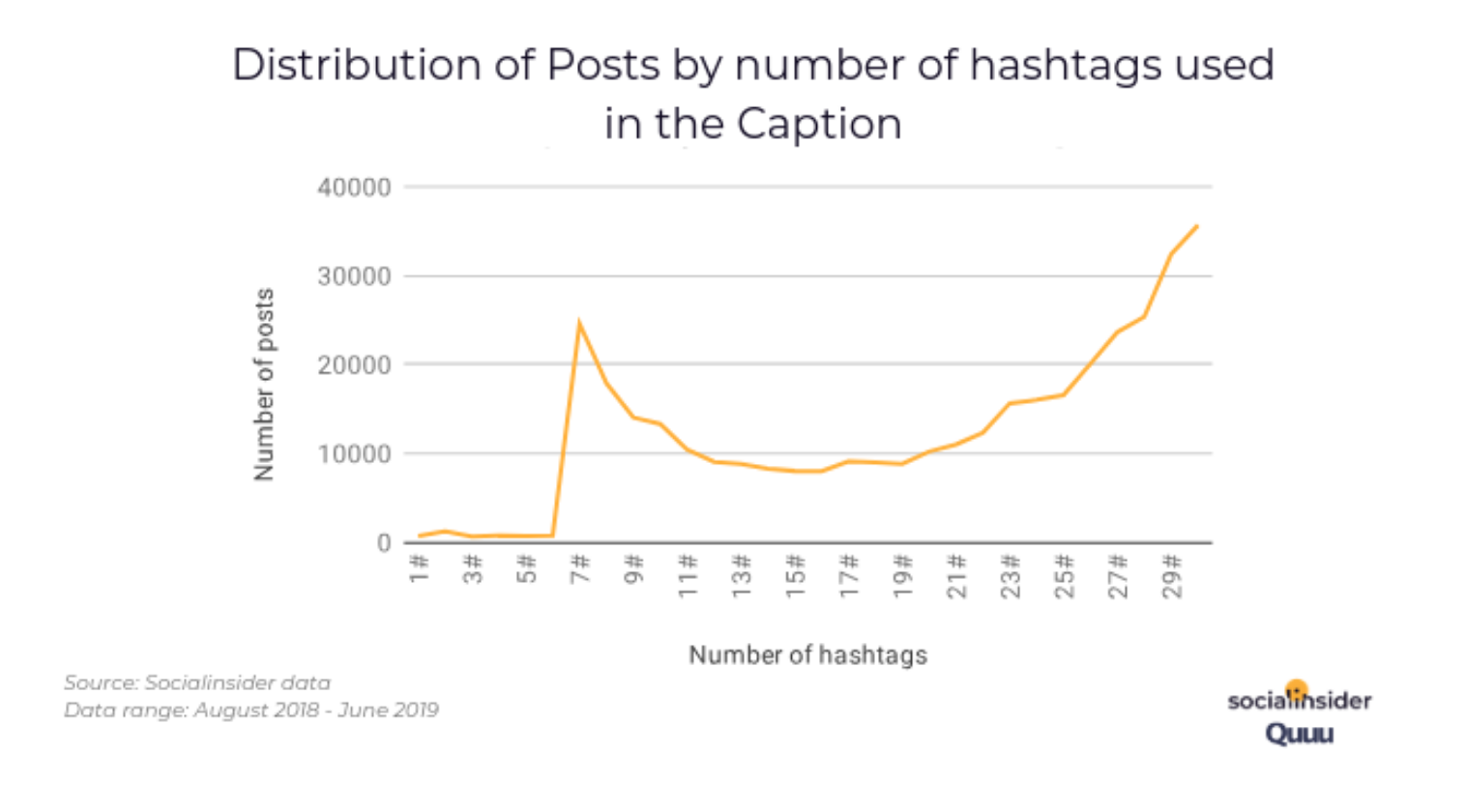 Distribution of posts with Instagram hashtags in the comments: 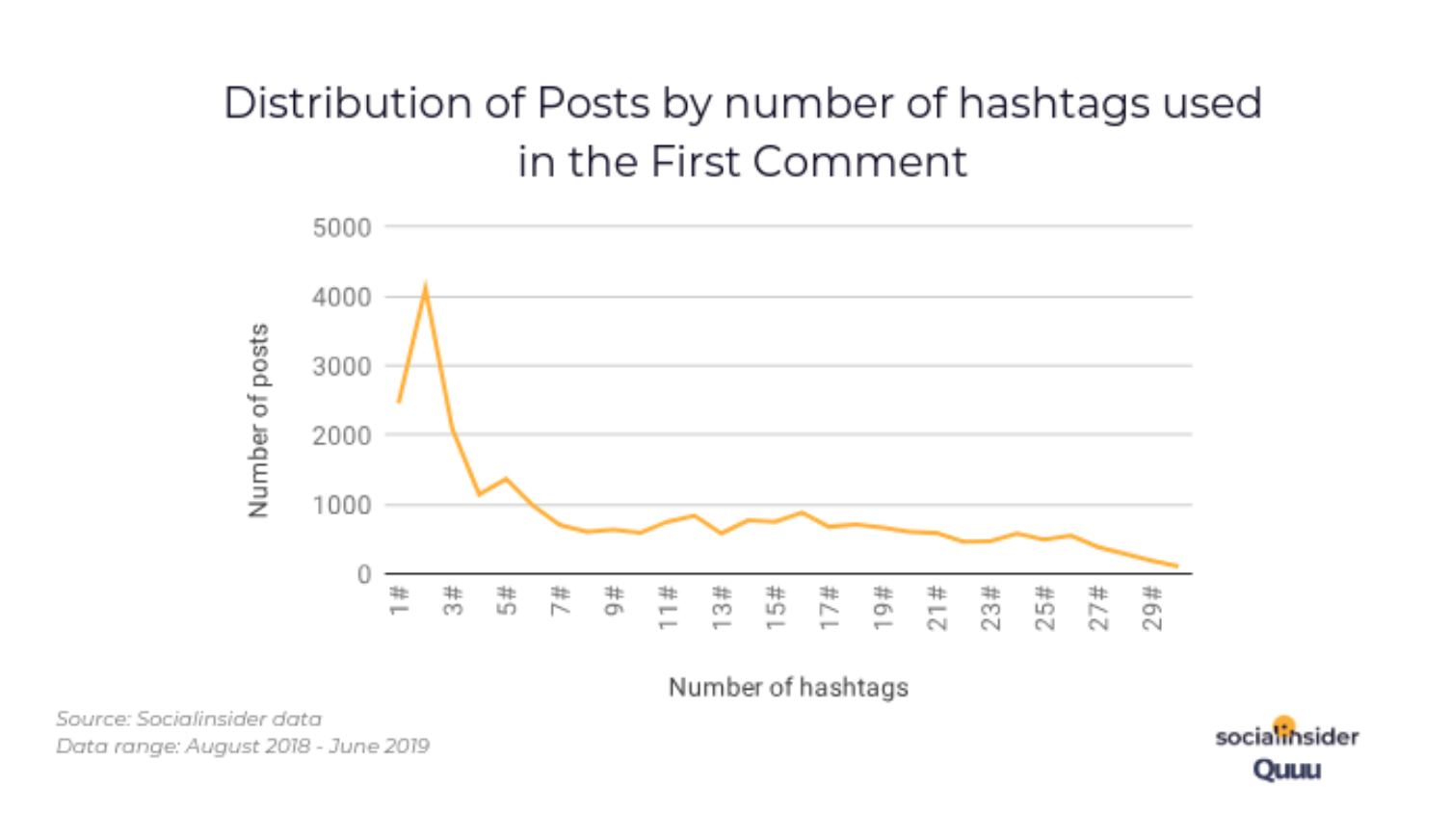 This is a LANDSLIDE – if you want to use more captions you should 100% be putting them in the caption of your posts, but if you are using less…(under 5), you can get good reach with the first comment placement.

Of course, the best thing to do (always) is to test this for yourself. The best data is always calculated from the exact same content (since that is the only way to truly test). But, you could still give it a try on different pieces of content just to see what kind of numbers you get.

Here is what the study outlined as best practices:

So, take some time to consider this in relation to the size of your account, as well as your goals with Instagram. Goals. Goals. Goals. We will keep coming back to this word, but it’s really important that you understand your goals in order to use this data effectively.

Should You ‘Hide’ Your Hashtags in the Caption

By “hiding” we are talking about line breaks so that they are at the bottom of the caption instead of right after the caption (which you can see immediately).

When we are doing engagement for our clients we notice that both methods are used, but if you ask our opinion we prefer the hidden, just to give your post a cleaner look – and to highlight the content. However, let’s look at what data came out of this study.

Engagement Rates on Hidden Vs. Shown Hashtags in Caption 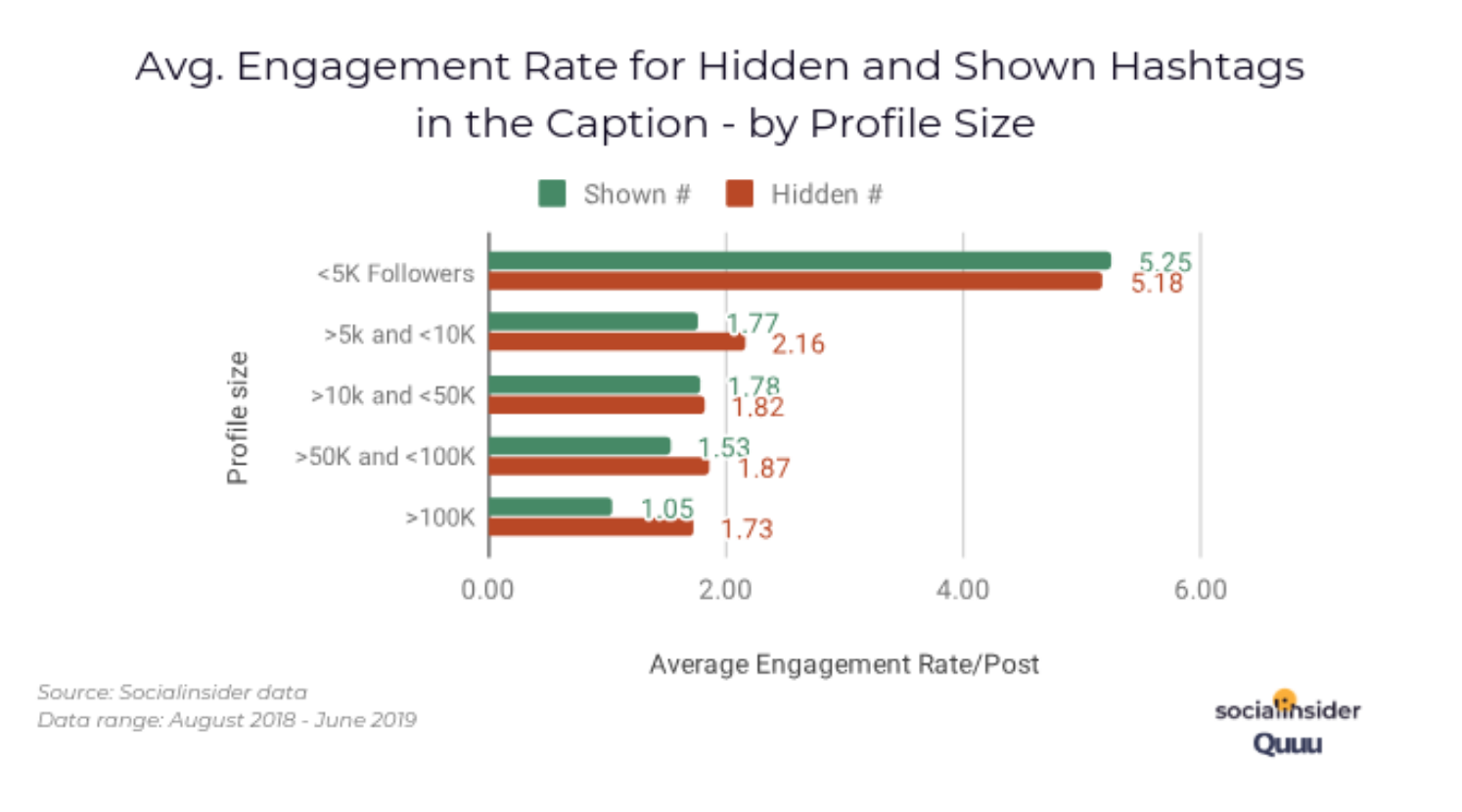 Well, that is pretty conclusive! If you want to increase engagement on posts, your best bet is to hide them in the caption. However, the data shows something totally different for brands that show the hashtags in the first comment.

Engagement Rates on Hidden Vs. Shown Hashtags in Comments 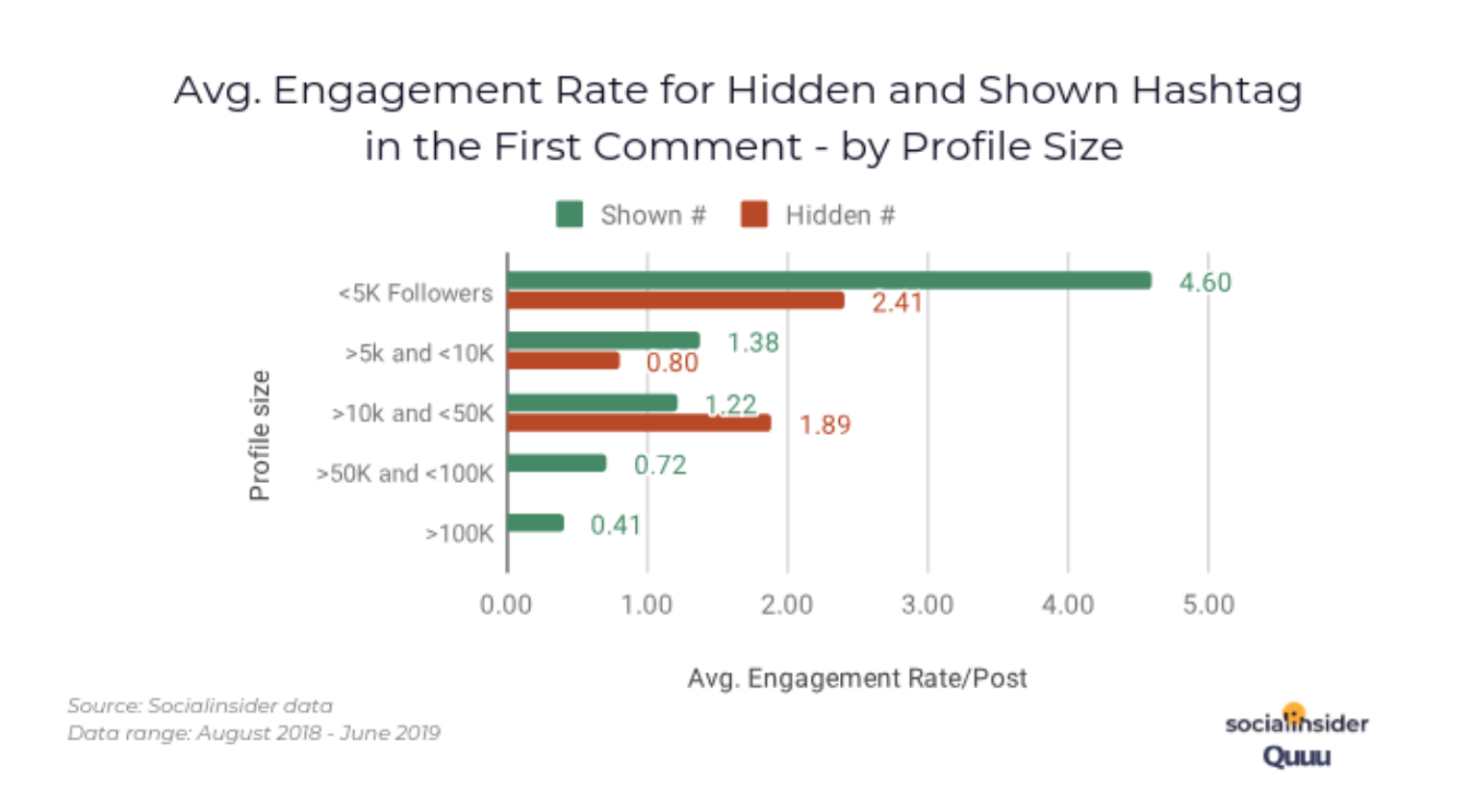 This is interesting! The hashtags in the first comment that are shown seem to help entice engagement, especially for the smaller accounts. If you’re under 5K followers, you should 100% be using visible first comment hashtags clouds.

Which Method Gets More Comments

So we’ve talked about reach and impressions, but what if you are looking for comments. Is there a big difference between caption hashtags and comment hashtags?

Here is what the study found: 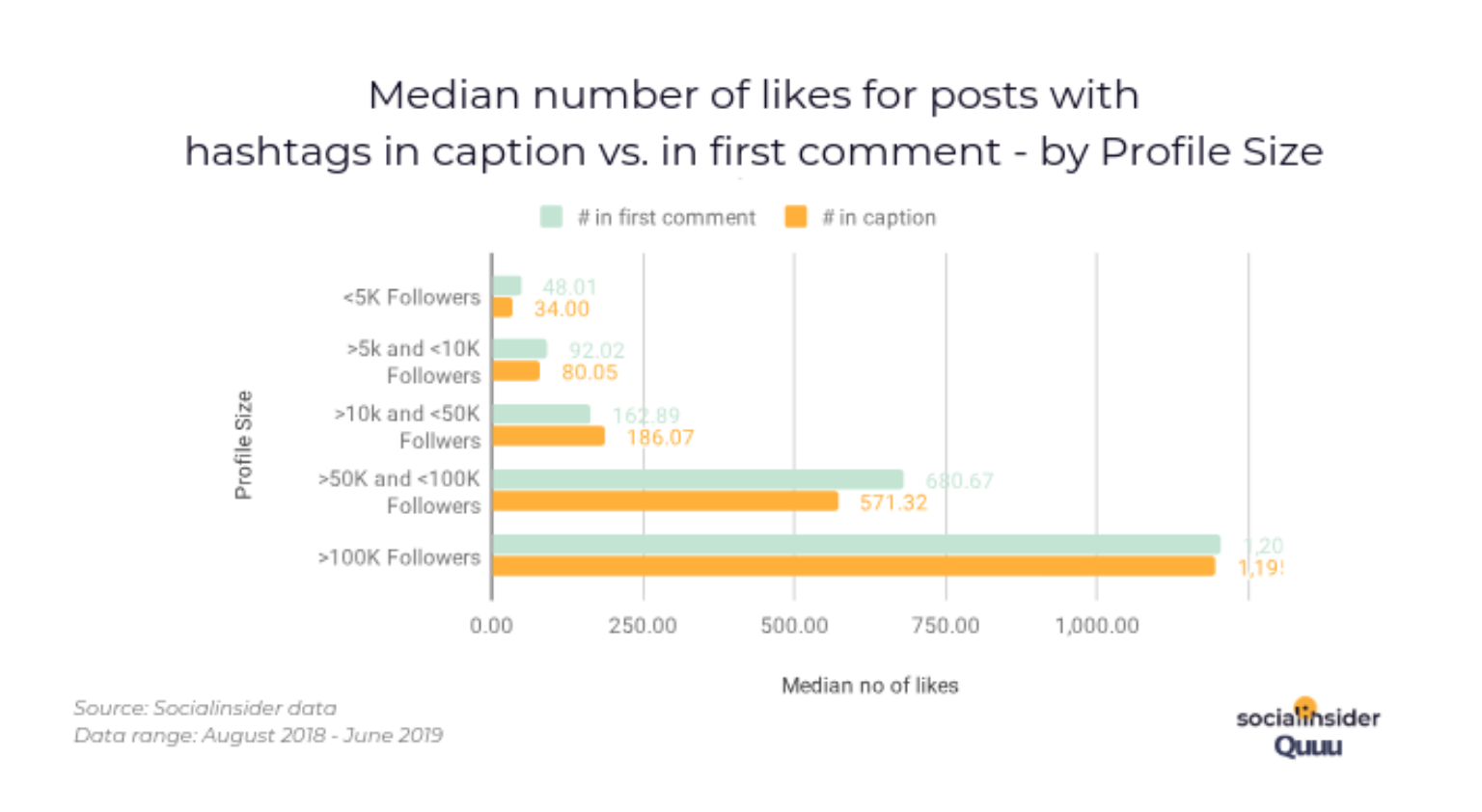 So – as you can see, more comments are given to posts that place their hashtags in the first comment. Very interesting!

Which Method Gets More Likes 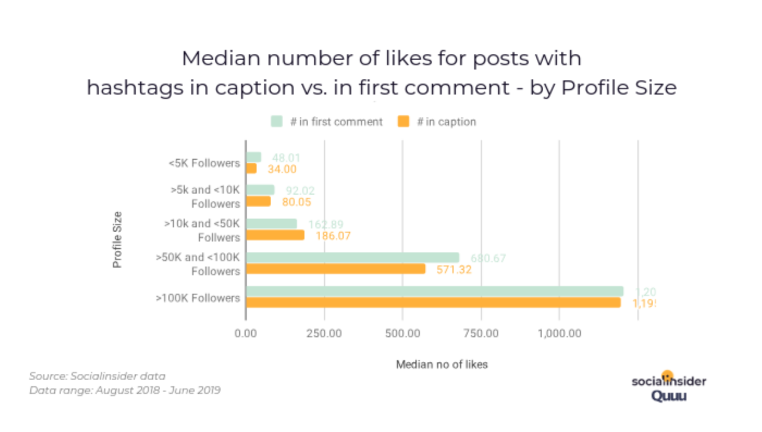 Okay, so we know how to get more impressions, more reach, and more comments – but which method will help you get more likes on your post?

So, what did we learn from the data uncovered in this study?

Honestly, I don’t think that there is a conclusive answer as to what the “best” method is – since there are so many factors to consider. What I will say is that there are lots of ways that you can use hashtags and your decision will ultimately depend on your goals. Are you looking for impressions, reach, comments, or likes? This is when you have to sit back and really think about what will serve you the best, and then use this data to make a decision and start applying the new tactics.

Need some help figuring it out? Contact us today to set up a FREE discovery session with our team – we’d love to help you zero in on the best hashtag strategy for your business.

Don’t want to miss any of our awesome content? Then subscribe to our newsletter below. We will only email you once a MONTH, we promise!