Over the years, we have seen social media channels popularity go up and way down.

Now, Facebook is dealing with a major hit due to the Cambridge Analytica Data scandal. But how is Snapchat doing?

In the past, we have seen social channels that ruled the social media space crumble in a matter of months. Twitter experienced a significant drop in users in 2015/2016. This drop was thought to have been due to competition on the social space, as well as a shift towards sharing images instead of just text.

Interestingly, we have seen a huge rise of users wanting to share and view in real-time. This has been reflected in the use of Facebook live, Instagram live, and Instagram stories. Social Media users are still loving the novel idea that Snapchat was the founder of – impermanence.  There is something fun and easy about sharing a photo or video that can only be seen for a short period of time… so why is Snapchat not on the rise?

Snapchat has been slammed for poor re-designs and App changes. The platform is constantly changing, but for many, not in a good way. Many feel that Snap’s recent updates and redesigns make seeing your friends and followers stories very challenging.

According to Kylie Jenner – who took to Twitter in February voicing her newly developed lack of interest in Snapchat – particularly because of the new-redesign: 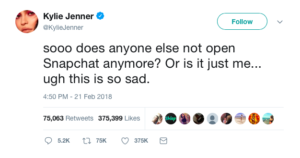 This celeb was known as the Queen of Snapchat, so the company – and her 25 million Twitter followers took this tweet hard.

It seems as though social channels are really lacking creativity – and starting to copy each other’s features. When multiple platforms offer the same (or similar) features, it can become very appealing for users to opt for one platform that does it all.

Facebook owns Instagram – (a fact that 56% of surveyed Americans did not know) so it is no surprise that they are copying features. However, Instagram now offers filters and sharing abilities that very much rival Snapchat – so some users are finding little use for using both – which is unfortunate for Snapchat.

On a personal level, I have not jumped on the ditching-Snapchat-bandwagon: I love it. I still think it has a place in my social media life. It definitely isn’t the only channel I use – but I still find it fun to see what new filter and games are added daily, and have even grown to love quickly watching news headlines on the discover page!

Snapchat is fighting hard to stay in the social media ring – recently they introduced an update, which lets users video chat with up to 16 friends at a time. Although this sounds fun on paper – I have heard very little buzz about people actually using this feature since its release.

Snapchat has never been the ideal platform for businesses/ marketing, but still has a space on many consumers’ phones.