Third party social media tools can definitely be useful for anyone on social media. If you are a social media marketer, you’ve probably used one yourself. The biggest question though, is do they have a negative impact on engagement?

The last thing you want is for one of the tools you use that should be helping you ends up hindering the success of the posts that you’ve spent hours carefully crafting. You may not always have the time to be posting yourself at the right times. You need these tools, but you also need engagement.

Do these tools even have an impact at all? Let’s discuss.

Sendible conducted a study on the impact of third party social media tools on engagement on Facebook. They analyzed over five thousand posts from 58 differing Facebook pages, all with a variety of followings and from a variety of industries spanning from sports clubs to restaurants to non-profits.

Their time frame was short and recent, looking through 100 of the pages’ latest posts, most of which had been published in September and October 2020. They took these and calculated the engagements rates for posts that were posted natively versus by a third party.

So what did they learn?

What was learned through this study might surprise you, but the impacts (positive and negative) were definitely clear.

Sendible had five key findings, which are: 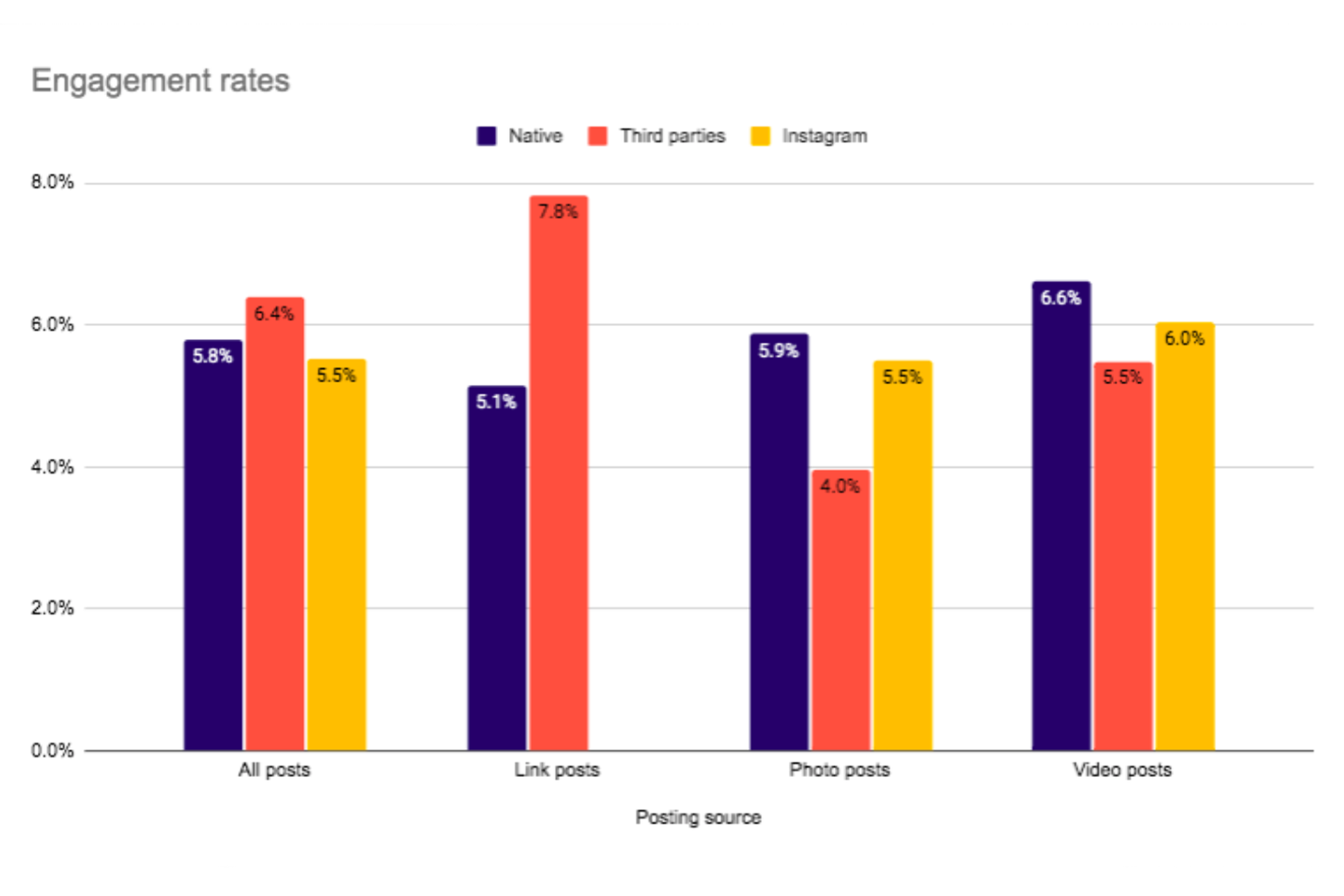 It is evident from this that neither third party tools or native posting are the better option. Instead, that depends on what you’re posting. In short, on Facebook it seems that posts without images and posts with links have higher engagement rates when published through third party tools. On the other hand, photos and videos seem to do better when posted natively.

In the end, though, posting onto Facebook through a third party social media tool does not negatively impact overall engagement.

“In fact, the average engagement rate for a post on Facebook in 2020 is 3.6%, so an engagement rate of 6.4% [as seen on the graph] is actually far above average and very impressive!” – Sendible

What About Everything Else?

We’ve discussed Facebook, but what about other social media platforms? Buffer conducted an experiment on the effect of third party tools on engagement and reach. Some of their findings were:

As you can see, third party social media tools didn’t have any negative effects. In fact, they seemed to have increased reach! Even on Instagram!

“Based on this knowledge, as well as the higher Reach achieved, my conclusion is posting with a 3rd party scheduling app to Instagram is not penalized. And in fact, it might lead to higher reach.” – Agorapulse

In the end, it’s important to remember that to get lots of engagement, it’s not just about the method in which you post them, but actually has a lot to do with timing. That’s where these third party tools truly help. They allow you to schedule posts for specific times that are proven to get higher reach and engagement, versus native posting where you can’t realistically post consistently at very specific times all the time.

If you’re going to take away anything from this, take away that third party social media tools are your friend, so use them! Overall, your engagement rates will be fine!

Need help with your social media strategy? Contact us today to set up a FREE discovery session with our team – we’d love to help!

Don’t want to miss any of our awesome content? Then subscribe to our newsletter below. We will only email you once a MONTH, we promise!