Picture this: the company – McDonald’s, the year – 2012, the hashtag #McDStories: What could possibly go wrong?

All right, so the intended plan here was to have customers share, via twitter, their positive stories and experiences about McDonald’s.  The twitter campaign was designed with its own special hashtag, so that customers could easily share their experiences with the Twitterverse.  McDonald’s even went as far promoting the hashtag, eliciting even more responses.

As the campaign began, tweets started to flood in. McDonald’s quickly realized that the sentiment of the majority of tweets was not what they expected.  Within two hours, the entire campaign was pulled.

The innocent hashtag had been hijacked and used against McDonald’s. Instead of users sharing what they love, or heart-warming childhood memories of the global brand, the hashtag was used to discuss the exact opposite. Tweets discussing horrible food quality, vomiting, health concerns… do I need to go on?  Needless to say, people had a lot to tweet about, but not what McDonald’s wanted to hear. Even PETA supporters got involved, throwing shade at McDonald’s for violating animal rights and questioning food production.

Here are some of my personal favourites: 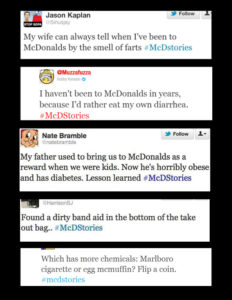 What can we learn from this social nightmare?

Twitter is very easy to use – maybe a little too easy in this situation. Customers were able to tweet their horror stories in a matter of seconds. There is very little monitoring and restrictions of twitter (especially in 2012) so the use of this platform was a risky choice.

Get a different perspective:

One major element that McDonald’s missed was sentiment. They did not account for people having and sharing unpleasant moments with their company. No one wants to hear that their baby is ugly (at least from certain angles) – and boy did McDonald’s hear this loud and clear. To avoid this, try to step outside your brand and think of all the ways a campaign/ post could go very wrong or be misinterpreted.  By stepping outside of your brand, or having an outside perspective take a look at your work – it can open your eyes to interpretations you may have never considered.

Have a backup plan:

McDonald’s was smart in having a second hashtag in circulation with their hashtag from hell. #MeetTheFarmers was used at the same time, and when the #McDStories went south, they started pushing the alternate hashtag harder. It is important to have a plan in place when a social campaign does not work the way you hope. This plan does not need to exist for solely major mishaps – but even small trips. What will you do if a campaign gets no engagement? How do you want staff to react to negative comments on social? Putting some time and thought into a what-if plan in the beginning can save you a lot of headaches in the long run.

Yeah, this risk didn’t pay off (if they even knew it was a risk), but that doesn’t mean you should be scared to run new campaigns. The thought behind the #McDStories campaign was not horrible – it was meant to increase engagement, and elicit user generated content.  User generated content can be extremely powerful, but it is definitely a risk. Some brands have found ways to do this well, such as Airbnb and Aerie. Aerie introduced the Aerie Real campaign – which promotes untouched photos of women in their products. This campaign has been especially successful on Instagram, using the #AerieReal (Check it out here).

Social Media can be scary, and campaigns can turn from amazing to horrible very quickly. If you want to leave your social campaigns to the pros – reach out to us!